Multicloud means the use of multiple private, public, and hybrid clouds for applications and infrastructure. Its adoption is often not planned, but industry analysts agree that enterprises need to embrace, rather than restrict its use. In many cases, Multicloud is being adopted due to varying requirements from business units, or compelling cost benefits associated with a specific cloud provider in a region.

The consistent approach that Coevolve hears from enterprises is that the traditional approach for the Wide Area Network does not work in this Multicloud model.

What’s expected of the enterprise WAN in a Multicloud environment?

It all starts with the underlay

Leverage the best-performing providers at each location on the network

Cloud environments are no longer considered as spokes, but an integral part of the environment

For many enterprises, the ‘center of gravity’ of the WAN is moving toward cloud providers. New models are emerging to leverage Cloud Provider backbones to replace inter-region MPLS connectivity. Automation options available including API-based integration with several SD-WAN vendors. There are some challenges with this model, particularly relating to consumption model – usage-based vs. traditional fixed cost for circuits.

The WAN must be able to provide the right level of control and filtering for each type of traffic. An emerging ‘best practices’ set of functionality for integrating security and the WAN is called ‘Secure Access Service Edge’, or SASE. This allows for the best mix of edge functionality and cloud-scale services to address security as an integral part of the network.

SD-WAN as the intelligent edge

A new model for the Multicloud core

Alkira provides a global, on-demand Multicloud network that can securely connect workloads and users across multiple cloud service providers and between geographical reasons. In addition, Alkira offers an on-demand network services marketplace to add additional services into the Multicloud platform. End to end visibility of the entire Multicloud environment is now possible with this solution, unlike traditional fragmented approaches. 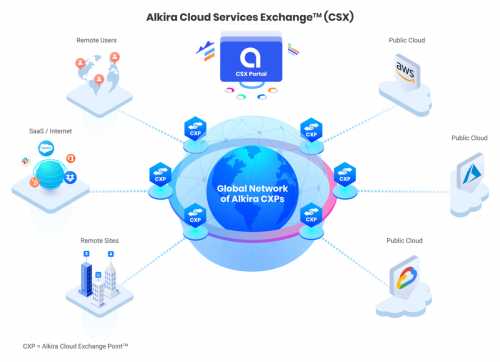 Coevolve looks forward to continuing to partner with Alkira to extend its Multicloud capabilities to additional global enterprises.

Coevolve is a Global Aryaka Partner. Our team has deployed Aryaka’s industry-leading global Network as a Service solutions for enterprises around the world. Here’s how we can help: